It was her opening words that grabbed me. “First of all, we are not afraid,” she said. In fact, every time the government decides to further suspend our civil liberties, our resolve strengthens, and the importance of our mission becomes clearer. We will remain peaceful, but planted on Parliament Hill until the mandates are decisively ended.”

“First of all, we are not afraid.”

The speaker at yesterday’s press conference was Tamara Lich, organizer of the Freedom Convoy in Canada. Word had come that Prime Minister Trudeau was about to announce the invoking of the Emergencies Act. Leadership of the grass-roots movement had taken to the microphones to address it.

I’d gone to bed troubled. For days, I’d been watching the working men and women of our neighbor to the north, expressing their dissent in the streets. From a friend on the ground, I knew that the protests were, in fact, peaceful. I knew that his fellow countrymen were pouring into the capital, filled with patriotic pride and love for God and for Canada.

Worship services and prayer were taking place in the streets. Family games and food tents had sprouted, and they were coming together as one to say, “Enough! We want to be free! Please listen!”

I knew that much was on the line, not just for them, but for the world. If Canada fell, many others could fall, too, and tyranny would sweep around the globe like a biblical flood. Then yesterday came Trudeau with his sweeping measures and an all-out assault on free speech; this, on peaceful protesters who were now being called “terrorists.”

Some of my fellow Christians believe we’re in the end of all time, that the return of Jesus Christ is imminent. Maybe we are and maybe it is. From some of them, I hear a despair, a “we just have to ride this out until the trumpet sounds” attitude.

“God wins!” they proclaim, and meanwhile they curl themselves inward, just keeping their heads down ’til they can go. To be blunt, they’re useless, curled in the fetal position with hands clapped over their quaking ears.

Ms. Lich continued, but now to her fellow Canadians. “Do not give in to fear and threats. Be strong. Show kindness. Love will always defeat hate.” And one last time, “Hold the line.”

Lying in bed last night, the words of Jesus came to my mind. It was in the parable of the nobleman who called his servants to him. He gave them money to invest, charged them to grow it for him while he was gone, and left them with this charge:  “Occupy–conduct business with this–until I return.”

Occupy. Do business. Actively work on my behalf to expand my interests, and when I come back, you will give an account of what you did and what you earned for me.

If you know the story, you’ll remember what happened to the servants. For each one who’d invested his portion, earning even a little bit, he was rewarded according to his investment. Some earned little and received little. Some earned much and received much, but it was the one who’d played it safe that drew his ire. Wrapping his coins in a cloth and hiding it away, he had nothing to show when the owner returned, and so it was ALL taken from him and given to someone who’d been faithful. 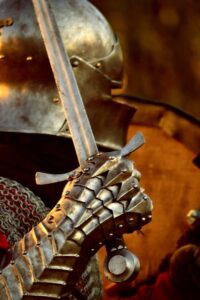 For the Christian, this is our charge. Whether the trumpet blows today or in 100 years, our directives remain the same. Occupy! Be busy about the Father’s business. Work hard, using the talents you have to grow His kingdom. No cowering and mere maintaining in timidity and fear.

One more time in Ms. Lich’s words, “First of all, we are not afraid. No matter what you do, we will hold the line. There are no threats that will frighten us. We will hold the line…Our resolve strengthens, and the importance of our mission becomes clearer. We will remain peaceful, but planted on (the) Hill.”

Us, too. We are not afraid. No matter what evil tries to do, we will hold the line. There are no threats that will frighten us. Our resolve strengthens, and the importance of our mission becomes clearer. We will remain peaceful, but planted on the Rock.